The 150,000 capacity Nürburgring is one of the world’s most renowned racing venues. Aside from its Grand Prix circuit, the venue is famed for its epic 21km Nordschleife layout.

When it was built, the Nürburgring’s full layout (Gesamtstrecke) was a whopping 28km, with four alternate configurations used. This full layout was last used for major racing in 1929. When racing resumed after World War II, it was run on the shorter, but still relatively mammoth, Nordschleife circuit.

Formula 1 first visited the circuit for the German Grand Prix in 1951. Jackie Stewart nicknamed the track as “The Green Hell”, thanks to its seemingly never-ending 170 turns and 300m of elevation change. It was one of the toughest events on the calendar, but as car speeds increased over the next decades, the layout became ever more unsafe. Niki Lauda’s near-fatal accident in the 1976 German Grand Prix, with ill-equipped safety measures, ensured that the longer layout would not be used in F1 again.

Between 1982 and 1983 the GP-Strecke was built, which is the circuit now used for major international racing events at the track. Formula 1 returned to this layout under various guises from 1984 onwards. The series raced here under the banner of the German Grand Prix, the European Grand Prix and even the Luxembourg Grand Prix in 1997 and 1998! Over that period, the layout was altered in 2002 with a new infield loop section, adding a further arena section for a better fan experience. Formula 1 made an unexpected return to the Nürburgring in 2020 after the original calendar was compromised by COVID-19. Lewis Hamilton won the 2020 Eifel Grand Prix for Mercedes.

While Formula 1’s days of utilising the Nordschleife are a distant memory, the full layout is still used regularly – including for the famous Nürburgring 24 Hours, which has run almost annually since 1970. DTM also races on the GP-Strecke each September and a round of the World Touring Car Cup is run on the Nordschleife layout.

Upcoming Events at Nürburgring in 2021

Located in the heart of Germany, the Nürburgring is easily accessible by car from many parts of Europe.

There are no large airports in the immediate vicinity of the Nürburgring. However, the following airports are within 1-2 hours’ drive of the circuit:

Given the circuit’s relatively rural location, the Nürburgring is best accessed by road. There’s a good network of motorways and secondary roads connecting the circuit to all parts of Western Europe. Local traffic restrictions and detours are put in place on major race weekends. The 150,000-spectator capacity Nürburgring offers ample trackside parking, including a large multi-story car park next to the info centre. Click here for more information about parking, including a detailed map. Sample driving times from major regional centres to the Nürburgring:

Getting to the Nürburgring by train is possible, but not particularly quick or easy – the closest train station to the circuit is Ahrbrück (24km away) and then you will have to take the 863 bus. Check routes on bahn.de using “Nürburg, Welcome Center” as the destination.

Aside from a good selection of trackside hotels, camping remains very popular during major race weekends at the Nürburgring.

Müllenbach is a huge 300,000m2 site directly next to the track. Click here for the map. Further afield, Campingplatz Stahlhütte (16km from the circuit) and Eifel Camp (27km from the circuit) offer picturesque surroundings and modern facilities without the craziness and parties of the trackside camping.

Learn more about camping at the Nürburgring

For those seeking more mod cons, there’s also several trackside hotels and accommodation in the local area. Demand (and prices) are higher on major race weekends, with most of the best rooms taken by teams, media and those working at the track, but the following hotels can be good for visits to the circuit at off-peak times.

Accommodation, including hotels, apartment rentals and homestays are also available in the nearby towns of Adenau, Nürburg and Herschbroich. Recommended places to stay include:

Check all accommodation near the Nürburgring

“Backstage tours” of the Nürburgring are available on weekends throughout the year.

The 90-minute tours include a look at the paddock, pit lane, start/finish building, media centre and VIP terrace.

Tours cost €7.50 per person (children under 6 are free) and run every Saturday and Sunday at 10am, midday, 2pm and 4pm. Tours don’t run when major events are happening at the circuit.

Tours must be booked in advance online or by calling  +49 2691 302 630. Only select tours are run in English, so it’s worth checking in advance if you don’t speak German.

The Nürburgring is one of the most popular circuits in the world for track days and driving/passenger experiences.

Companies that organize regular track days at the Nürburgring:

Check the full calendar for driving experiences and track days.

The track is also opened regularly for so-called Tourist Drives, when you can drive your own car on the circuit. It costs from €25-30 to do a lap of the 20km Nordschleife. You can rent a car for the experience from rentracecar.de and rent4ring.de. 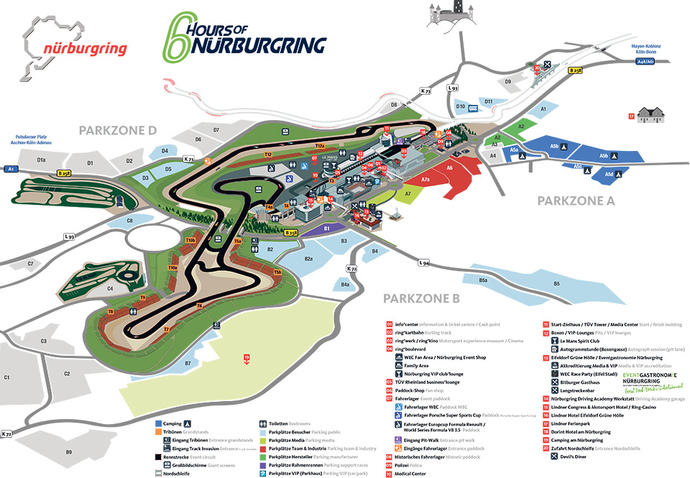