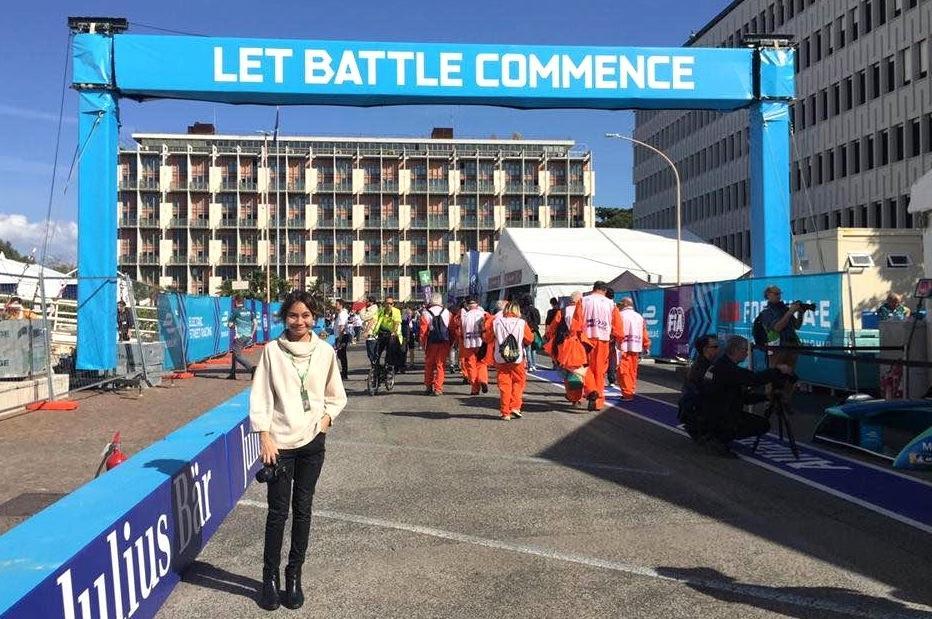 By the time you read this, the Formula E championship will have moved on to the next rounds in Europe, but the inaugural Rome E-Prix was definitely a significant event that will go down in the history books. Not only was the event a major success with tickets being sold out months in advance and a huge turnout on race day, it was also the first time in decades that Rome had staged street racing, and that in itself was an amazing feat for the all-electric championship. In fact, Formula E CEO Alejandro Agag and Rome Mayor Virginia Raggi announced during the podium ceremony after the race that negotiations are underway to stage the Rome E-Prix for a further five years.

My Roman adventure began on Tuesday. I arrived a bit earlier in the week to do some sightseeing before the race weekend began as it was my first time in the Italian capital. The sights of the city were exactly how I pictured them to be. The crumbling ruins in the city center near the Colosseum gave a romantic yet somber mood to the city, but that might also be because the weather was a bit moody during the first few days I was there.

As I was about to find out, getting around in Rome is a bit tricky. I stayed at the Sheraton Parco de Medici, a lovely hotel that’s unfortunately slightly out of the way. However, they do offer a shuttle bus service to a few popular locations around the city and to the nearest Metro Station. Taxis and Ubers were also in abundance, but Italian traffic, as you might have heard, can get a bit hectic.

Getting monumental in the EUR

I headed to the track on Thursday morning which was located in the EUR district. If you’ve ever watched Michelangelo Antonioni’s film, L’Eclisse which was shot in the district in the early 1960s, you’ll immediately notice that not much has changed. Roaming around the monumental structures that dominate the area, I certainly felt some of the alienation the film’s heroine experienced as she wandered around the bare streets of EUR, though the streets were far from being empty while I was there. It is now a thriving business hub in Rome. 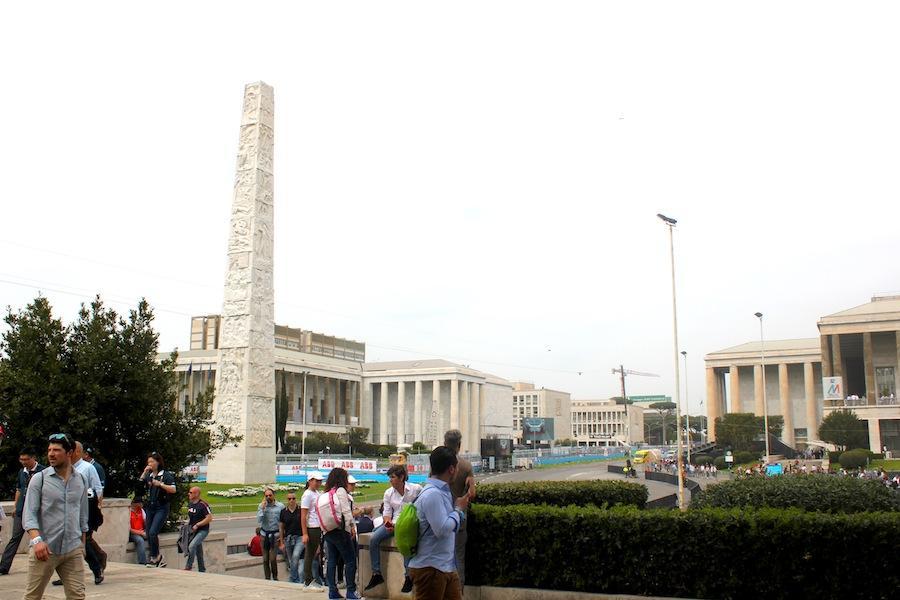 The district was in fact envisioned by none other than Benito Mussolini, and was constructed as a celebration of Fascist rule in Italy dating back to the late 1930s. Its construction was plagued by delays due to the outbreak of WWII, which also brought the thriving motor racing scene in the area to a halt. The modernist architecture surrounding the circuit made for an impressive and slightly ominous backdrop for a Formula E race, but it definitely gave the circuit a distinctive character!

My first interview of the weekend was with Venturi engineer, Jacky Eeckelaert, who joined the Monegasque team this season. The Belgian is a well-known veteran in the motor racing paddock, having worked with Ford in the 1970s and with Jordan in the 1990s. He’s definitely someone who isn’t short of a motor racing anecdote or two! 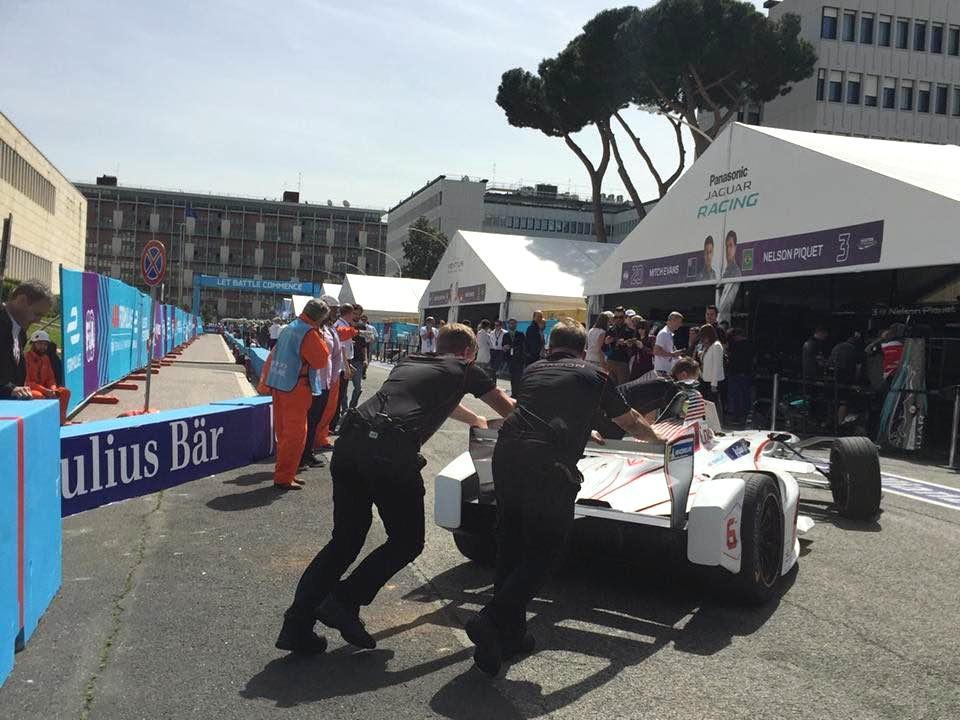 Meanwhile, finishing touches were still being made at the track and the teams were busy setting up. Some of the drivers were in the paddock early for briefings with their engineers. Overall the mood was very laid back. Rain clouds seemed to be looming around the circuit all morning, so I headed back to the hotel to get some work done.

The skies finally cleared up for media day! I made my way to the accreditation center to collect my media pass, then headed to the Media Center in the Palazzo dei Congressi. Being at the track that day reminded me of being at the first ever Paris ePrix, it just had that buzz that told you that this will be another favorite fixture on the Formula E calendar.

There were a few famous faces in the paddock, including the Mayor of Rome Virginia Raggi and former World Superbike champion Max Biaggi. NIO driver, Luca Filippi was a favorite that weekend as the only Italian on the grid this season. His extended family was there in the paddock to give him support, all wearing matching T-shirts bearing his name!

I managed to get a quick interview with Sam Bird, who would later take the win in Rome. When I asked about how confident he was for the race on a scale of one to ten, he said a “solid five.” I could tell he was being modest as he was definitely on a different level that weekend. After media day duties are done, it was off for some pasta and an early night to be ready for an early start on race day.

Crazy traffic & an even crazier race

I misjudged the Italian traffic and ended up getting stuck due to some road closures. Thankfully, Italian taxi drivers (or at least the ones I met) were quite helpful and were willing to do almost anything to get you to your destination, including plenty of shouting at other drivers!

The crowds were already filling up the grandstands and the Allianz E-Village was buzzing despite the early hour. A big crowd puller in the E-Village was the new Formula E Gen2 car, which was on display. It definitely gives everyone something to look forward to the next season and really is a beautiful piece of engineering, especially up close. Back in the paddock, familiar faces were filling up the grid just before the race start. Prince Albert II of Monaco, Sienna Miller, Felipe Massa and Flavio Briatore definitely added some luster to the event.

The race itself definitely didn’t disappoint. The last few laps kept most of us in the Media Center on the edge of our seats especially when Mitch Evans of Jaguar was so close to getting his first podium but ran out of energy. Sam Bird took the victory as Lucas di Grassi came in a close second and Andre Lotterer of Techeetah took third. The circuit proved to be one of the more challenging tracks in Formula E, with many undulations and critical overtaking spots making for an entertaining spectacle. The podium ceremony was memorable as thousands of fans flocked to the courtyard area with the giant Marconi obelisk in the background.

Looking back at how the weekend unfolded, I can’t help but feel as if I had been a part of something very special. It’s definitely one of my favorite locations on the calendar and I look forward to it being a part of Formula E for many years to come. You also can’t go wrong with somewhere like Rome where a good plate of pasta and gelato are just an arm’s length away!